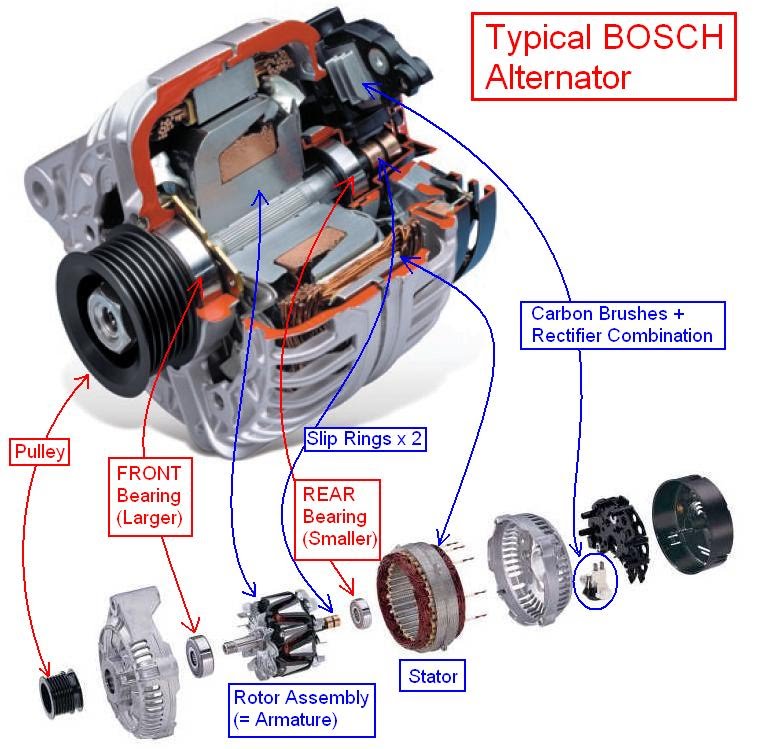 Alternator problems are fairly common. You will probably have some type of problem with your alternator in your car’s lifetime. The charging system on your car plays an essential role in everything electrical. If your charging system is not working correctly, it can cause major electrical problems so it pays to know a little bit about it.

How Does an Alternator Work?

An alternator’s main purpose is to maintain the battery. Basically what happens is that it uses the engine power to create electricity and sends it over to the battery to keep it fully charged. Engine power is sent to the alternator via the engine drive belt, aka serpentine belt. This is why it is so important to keep the belt tight and replace it when needed.

When you are driving your car with all the lights on, the windshield wipers on and the radio blasting it uses a lot of electrical power. If all you had was a battery all of this electricity usage would drain the battery in a matter of minutes (sometimes more like an hour depending on how good your battery is). To prevent this from happening and to keep our battery fully charged, we use an alternator.

It can be very tricky to diagnose these problems without any tools. Battery problems often seem like alternator problems and vice versa. Some of the most common things that happen are things like your car not starting, your battery going dead, serpentine belt squealing and battery light on. These are the most common, but there are others as well.

How to Check Alternator Voltage

It should read above 12.65 volts. This would indicate that the battery is fully charged. If it is not, then you either have alternator problems or a battery that is faulty.

The next thing you need to do is to remove the leads from the battery and start your car. Then put the leads back on being careful not to get them caught in the serpentine belt or any other part of the engine.

Read the voltage with the engine on. It should read somewhere in the 13.5-14.5 volt range. If it does then most likely the alternator is just fine. It is possible that it is still bad though, sometimes they are intermittently bad. If it proves to be good then you probably have battery problems. It is time to get the battery tested.