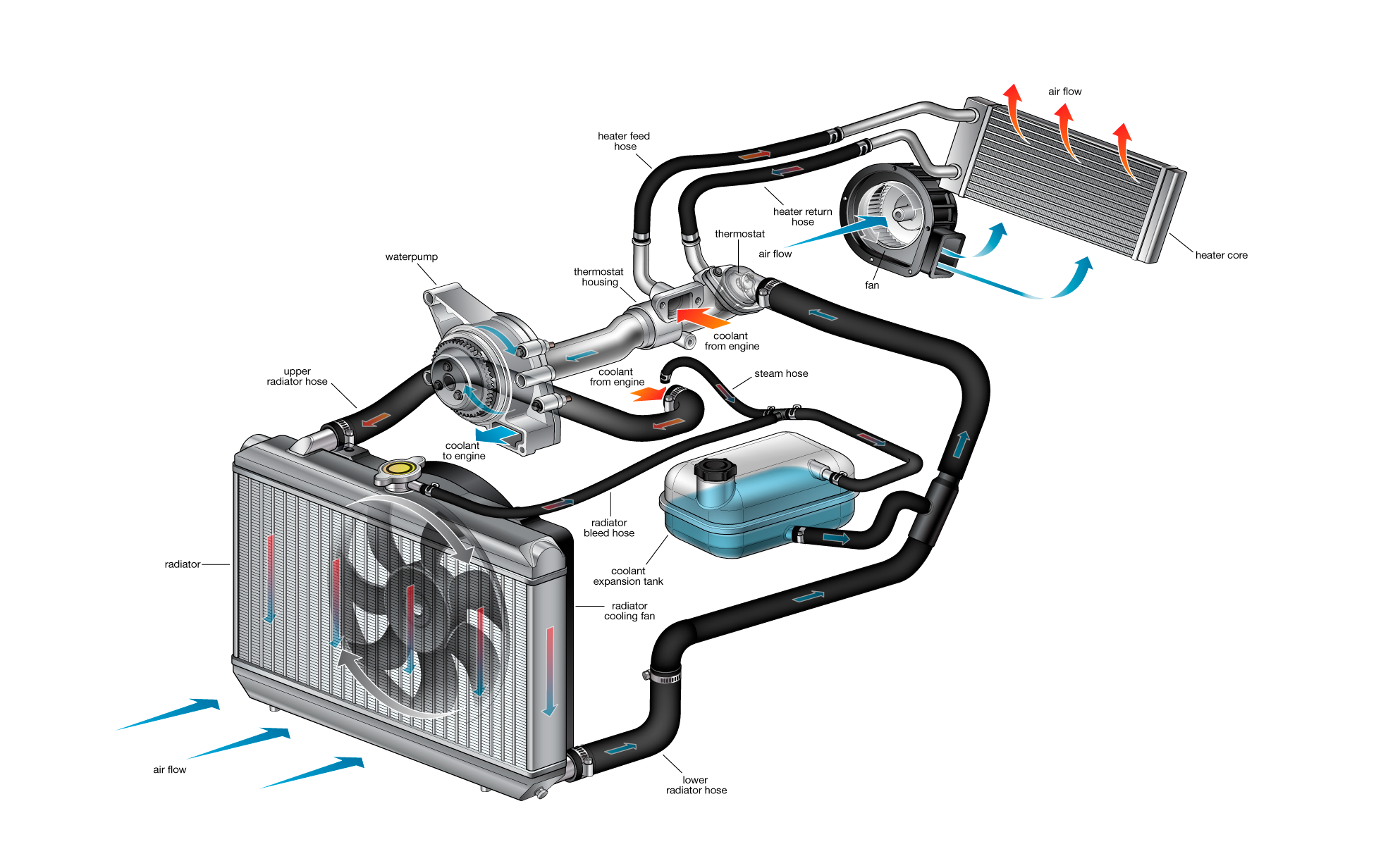 A water-cooled engine block and cylinder head have interconnected coolant channels running through them. At the top of the cylinder head all the channels converge to a single outlet.

A pump, driven by a pulley and belt from the crankshaft, drives hot coolant out of the engine to the radiator, which is a form of heat exchanger.

Unwanted heat is passed from the radiator into the air stream, and the cooled liquid then returns to an inlet at the bottom of the block and flows back into the channels again.

Usually the pump sends coolant up through the engine and down through the radiator, taking advantage of the fact that hot water expands, becomes lighter and rises above cool water when heated. Its natural tendency is to flow upwards, and the pump assists circulation.

The radiator is linked to the engine by rubber hoses, and has a top and bottom tank connected by a core a bank of many fine tubes.

The tubes pass through holes in a stack of thin sheet-metal fins, so that the core has a very large surface area and can lose heat rapidly to the cooler air passing through it.

On older cars the tubes run vertically, but modern, low-fronted cars have crossflow radiators with tubes that run from side to side.

In an engine at its ordinary working temperature, the coolant is only just below normal boiling point.

The risk of boiling is avoided by increasing the pressure in the system, which raises the boiling point.

The extra pressure is limited by the radiator cap, which has a pressure valve in it. Excessive pressure opens the valve, and coolant flows out through an overflow pipe.

In a cooling system of this type there is a continual slight loss of coolant if the engine runs very hot. The system needs topping up from time to time.

Later cars have a sealed system in which any overflow goes into an expansion tank, from which it is sucked back into the engine when the remaining liquid cools.

How the fan helps

The radiator needs a constant flow of air through its core to cool it adequately. When the car is moving, this happens anyway; but when it is stationary a fan is used to help the airflow.

The fan may be driven by the engine, but unless the engine is working hard, it is not always needed while the car is moving, so the energy used in driving it wastes fuel.

To overcome this, some cars have a viscous coupling a fluid clutch worked by a temperature sensitive valve that uncouples the fan until the coolant temperature reaches a set point.

Other cars have an electric fan, also switched on and off by a temperature sensor.

To let the engine warm up quickly, the radiator is closed off by a thermostat, usually sited above the pump. The thermostat has a valve worked by a chamber filled with wax.

When the engine warms up, the wax melts, expands and pushes the valve open, allowing coolant to flow through the radiator.

When the engine stops and cools, the valve closes again.

Water expands when it freezes, and if the water in an engine freezes it can burst the block or radiator. So antifreeze usually ethylene glycol is added to the water to lower its freezing point to a safe level.

Antifreeze should not be drained each summer; it can normally be left in for two or three years.

At Universal Motors our fully equipped workshop in Thomastown, provides radiator, water pump, thermostat and cooling system testing and repairs for all makes and models. All our car repairs come with a minimum 12 month/20000km warranty.

The cooling system in your car requires regular servicing and maintenance to ensure your engine stays in good condition and does not overheat. Common cooling system parts include a radiator, a radiator cap, a thermostat, a water pump, radiator hoses, a heater tap and coolant. 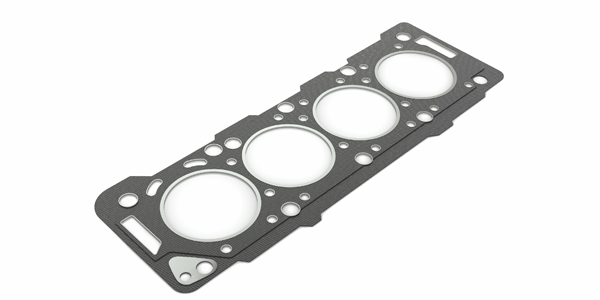 CAR HEAD GASKET REPAIR AND REPLACEMENT SERVICES A blown head gasket is one of the most expensive problems you can... 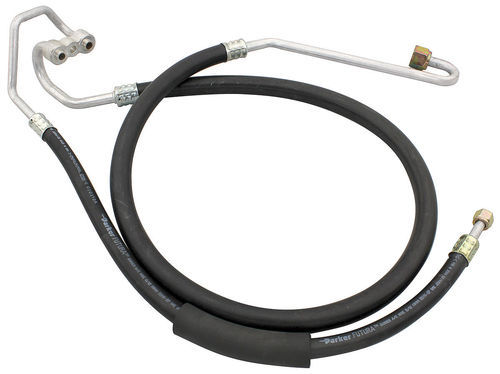 RADIATOR HOSE REPAIR AND SERVICES Most of us pay all the attention to the condition of the tyres, the engine,... 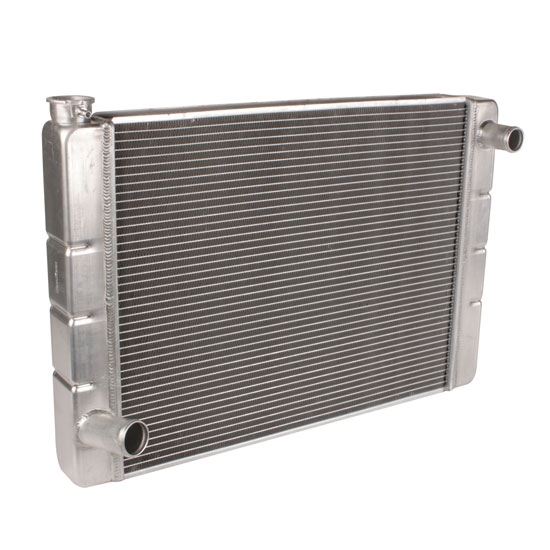 CAR RADIATOR REPAIR SERVICES AUSTRALIA Is your car overheating? Have you experienced the stress of pulling your car at the... 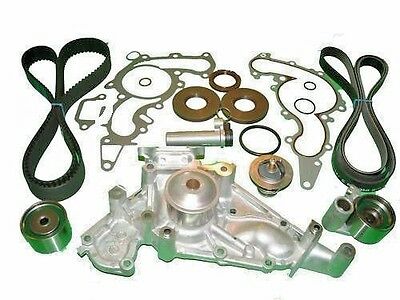 THERMOSTAT AND DRIVE BELT REPAIR AND REPLACEMENT SERVICES The air and fuel together produce the power needed inside the engine... 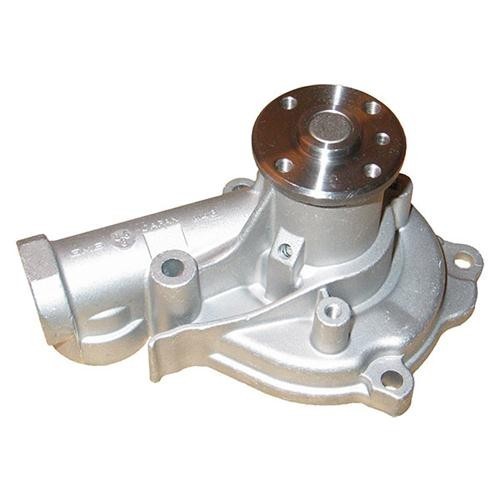 CAR WATER PUMP SERVICE AND REPLACEMENT The engine generates an incredible amount of heat and if it is not cooled...