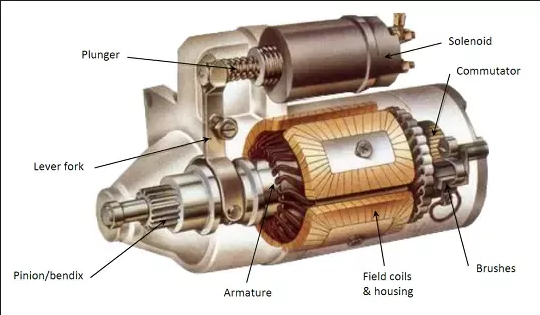 A starter motor is a device that is capable of turning over an internal combustion engine until the process of combustion takes over. This is typically accomplished by providing the necessary mechanical energy to rotate the crankshaft for a given number of cycles. While the starter motor is rotating the crankshaft, the engine begins the process of combustion. The starter is then able to disengage once the engine is running under its own power. Most automotive starter motors are electric, but some applications use pneumatic or hydraulic power.

How Do Starter Motors Work?

Internal combustion engines are typically incapable of “self starting,” which means they require some external force to start running. This is typically accomplished by using some method to turn the crankshaft until the process of combustion can take over. The single most common example is an electric starter motor that engages with a toothed flywheel or flex plate.

In gasoline engine applications that use an electric starter, the operation of the starter motor is relatively simple. When the ignition is activated (either via a key or a button), power is delivered to an electric starter motor. That causes the a small gear to extend and mesh with the teeth of a ring gear that is fixed to either a flywheel or flex plate. This flywheel or flex plate is bolted to the crankshaft of the engine, which allows the starter motor to turn the engine over.

There are a few different kinds of electric starter motors, but they typically include these basic components:

When your starter motor fails, it becomes impossible to start your engine. However, there are a lot of other problems that can result in a no-start situation. If the engine cranks slowly, it could be be a starter motor that is drawing too much amperage, but it could also be a bad battery or even wiring. Other common starter motor problems are related to the solenoid, which can be either built into the starter or located remotely, and the starter motor relay. In any case, the diagnostic procedure typically involves checking to see if the solenoid and relay are receiving power and whether they are operating properly.

Starter motors can also fail mechanically, which typically results in the Bendix drive or sprague clutch system failing to engage. In that case, a rebuild or replacement is typically the only solution. Of course, a starter motor can also fail to operate properly if the teeth on the drive gear or the ring gear are damaged. This type of damage can be the result of attempting to start an engine that is already running, a starter motor that doesn’t retract its gear properly, or a handful of other issues. In cases where a starter motor fails to work due to broken or missing teeth on the ring gear, the engine or transmission typically has to be removed in order to replace the flywheel or flex plate.